The government’s Thrift Savings Plan (TSP) is one of the most overlooked benefits of working in the government. As you know, Thrift Savings Plan is the government’s answer to a 401(k) or other employer-provided retirement plan.  TSP was established in 1986, as part of the Federal Employee Retirement System (FERS), which replaced the legacy Civil Service Retirement System.  The TSP was designed to allow civil employees to assume some of the risk in saving for their retirement by choosing how much to put away every month, and what to invest it in.

The military did not adopt TSP until 2000, but looks to be going in the same direction.  As a result of the FY 2016 National Defense Authorization Act, the traditional 20-year retirement system will no longer be available for new recruits starting in 2018.  Instead, the government will create the new Blended Retirement System, in which they combine the traditional military pension at a reduced rate with TSP contributions made by both the member and the military. The military will automatically deposit funds into a TSP account and offer matching contributions as part of the military member’s pay and benefits.

The TSP offers numerous benefits to participants, including the following:

TSP has the lowest investment costs of any investment vehicle out there.  Take a look at Vanguard.  Vanguard is generally regarded as the mutual fund industry’s low-cost leader due to its quantities of scale.  When compared to their Vanguard counterparts TSP index funds are a fraction of even those.  Let’s compare a $1,000 investment in the Vanguard S&P 500 Index Fund (.17% expense ratio) to the TSP C Fund (.029% expense ratio).  That means for a $1,000 investment, Vanguard will charge $1.70 per year, while your Thrift Savings Plan charges 29 cents!  By the way, in the mutual fund industry, an annual expense ratio below 1% is generally all right.  However, index-tracking funds such as these should be below .5%, so you can see that Vanguard & TSP are both well below the industry standard. But TSP is better.

2.  The TSP is Well Diversified

If you’re interested in tracking the stock market and buying or selling individual stocks, then TSP is probably not for you.  However, if you’re looking for a way to just sock money away, over a long period of time (such as the course of your military career), then TSP is perfect.  The fact is that between the G, F, C, S, and I funds, there is sufficient diversification to cover the major asset classes that you should be invested in.

The L (for lifecycle) funds go one step further.  The L funds are target funds, which means that they invest aggressively early on, then gradually adjust the asset allocation towards more conservative investments as you get closer to your target date.  For example, today’s new officers & enlisted personnel will probably be invested in the L2050 fund.  The L2050 fund currently is 86% invested in the C, S, & I (all stock) funds, and only 14% invested in the G & F (bond funds).  In contrast, the L-Income fund, designed to conserve assets & pay out income to today’s retirees, is 80% invested in the bond funds & only 20% in the stock funds.  Of course, L2020, L2030, and L2040 funds are each somewhere in between.

With the L funds, you should keep two things in mind.  1) If you invest in the L-fund, DO NOT dabble with any of the other funds.  If you do, you will mess up the asset allocation that is part of the L-fund design.  2) You need to make sure you pick the L-fund that is designed for your time horizon. If you want to check when that may be, go to the TSP L-fund information sheet.

This wasn’t around during my deployments, but I wish it had been.  Even so, I was able to make tax-exempt contributions to my TSP account, which has its own benefits.

Let’s take a look at how the Roth works.

The TSP, just like a traditional 401(k) or IRA, defers taxable income.  You take a tax deduction today, and defer paying the taxes until you start pulling it out.  This is also known as using ‘before-tax’ money, since the money is not taxed when you contribute. In contrast, the Roth version of these plans is after-tax, meaning that your contributions are from the money left over after you pay taxes.  You don’t get to take the up-front tax deduction, but all of your earnings are tax-free.

When a service member contributes to a Roth account during their combat zone deployment, they get to take advantage of both sides, figuratively speaking.  Since combat-zone pay is tax-free (up to the maximum amount established by law, which is the maximum senior enlisted pay + eligible combat pay), you don’t pay any taxes on it.  If you put that money into a Roth account, your earnings will eventually be tax-free as well, provided your withdrawals meet the IRS distribution guidelines.  This truly is one of the benefits of the military, as there are very few investment vehicles like this for civilians.

4. It Is Part of a Balanced Retirement Plan

Learn more about how you can use both a TSP account and IRA to save for retirement.

Conclusion: The TSP Can Meet Almost Any Investor’s Needs

The Thrift Savings Plan benefits laid out in this article are just the tip of the iceberg. There are many other reasons why the TSP makes a great investment vehicle for your retirement needs. Be sure to take these aspects of the TSP into consideration if you ever leave the military or civil service. For many people, the best option is to simply leave your funds in the TSP, even after leaving government service or retiring. 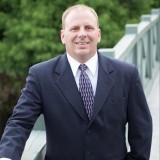 Forrest Baumhover is a Certified Financial Planner™ and financial planner with Lawrence Financial Planning, a fee-only financial services firm. As a retired naval officer, Forrest helps veterans, transitioning servicemembers and their families address the financial challenges of post-military life so they can achieve financial independence and spend more time doing the things they love.